Cougars Get the Ball Rolling 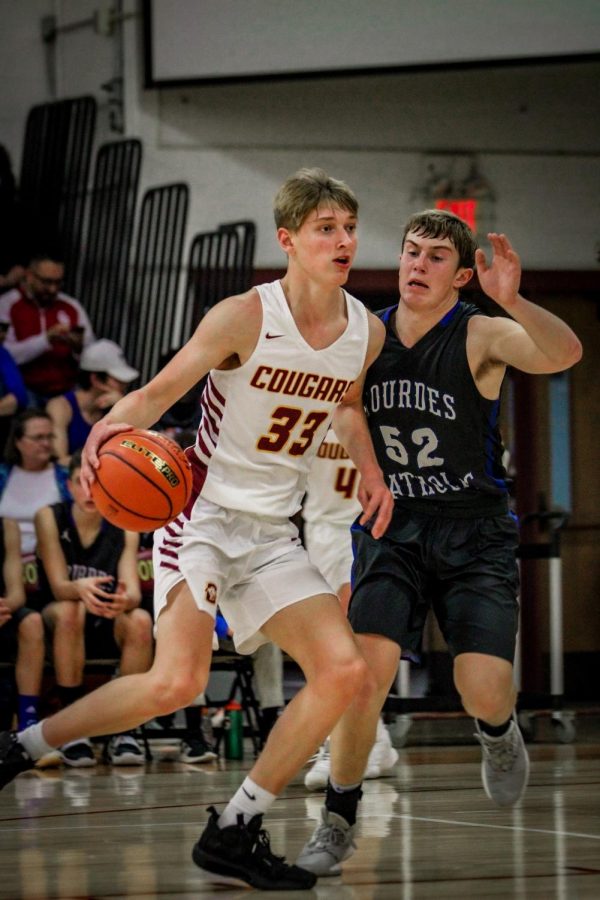 MURRAY, NEB.–The Conestoga Boys and Girls Basketball teams had their home jamboree game against Lourdes Central Catholic on Tuesday night. This game is meant to be a game like scrimmage. The Cougars fought hard through the games but fell to the Knights.

“The whole point of a jamboree is to see what we need to work on before the real season starts,” Mati explained.

With the season just starting, the coaches and players have a lot to look forward to and improve on as the season progresses. Lucas M., a senior on the boys team, said, “I’m really looking forward to spending my last season with some amazing teammates and coaches that have helped me grow so much not only on the court, but off it too. I can’t wait to just go out every game and do my best playing the game I love.”

Senior Mati S. stated, “I am looking forward to this year’s team’s willingness to compete. We are all so excited to get out on the court and show everyone what we can do.

Lindee W. stated, “I am most excited about integrating this new team, we have a great group of freshmen that do a great job of pushing the upperclassmen, so I’m looking forward to this new team and what we can accomplish together.”

The girls head coach, Tony Theis, is looking forward to this coming season as well. “I’m looking forward to seeing girls step up into new roles and grow in their confidence as individuals and as a team. We have a good group of girls with experience and a good group of young girls that are hungry to compete and get better. We have a great chance to take another step forward this season and I’m excited to keep working and improving!”

The jamboree will not count on either team’s record but was a great look at what needs to improve upon and what challenges the teams might face this season. Both teams lost key players in last year’s graduating class, with the girls team having only three returning starters, and the boys having two. With new players having to step into new roles too, replacing last year’s seniors will have challenges for both teams.

Tyler F. said, “Some challenges our team is facing are that we aren’t that deep, but I think we have the players that have the potential to fill the spots for when people get in foul trouble or are just struggling in general, but they just need to step up. Also, injuries will be a challenge for us, and we just need to take care of our bodies and make sure we are icing and stretching properly.”

The Girls team lost two big key players Myah C. and Taylor M., both key ball handlers. These are now big roles to fill and it is a big challenge for the girls team. “We struggle handling the ball, and that is something that we all need to step up and get better at. We need to get our confidence up and take care of the ball,” said Mati S.

With key players missing and big roles to fill, the Cougars had a few mistakes in Tuesday’s game. “Overall, I think the team did a lot of good things last night. We saw a lot of potential and spurts of good basketball. We made a few mistakes and had a few lapses that cost us in key situations. The jamboree is a great opportunity for us to see where we are at and what we need to improve going forward!” said Coach Thies.

The seniors also had things to say about last night’s game. “I don’t think we played up to our expectations. We know what we’re capable of with all of our skill if we do the little things. Get in gaps, limit turnovers, and hustle. I think we were just outworked, but we still have a week until our first game to fix that so that’s the good thing,” said Lucas M.

Lindee W. commented,“I think it was a great starting point, we are changing our game up quite a bit this year and the type of game we are going to try to play. I think we did a great job in some areas, but a lot of just early-season mistakes.”

The Cougars will play their first season game Thursday against the Louisville Lions at home.