You Don’t Know Us – Conestoga Cheer

Conestoga Cheer...Who Are we Really? 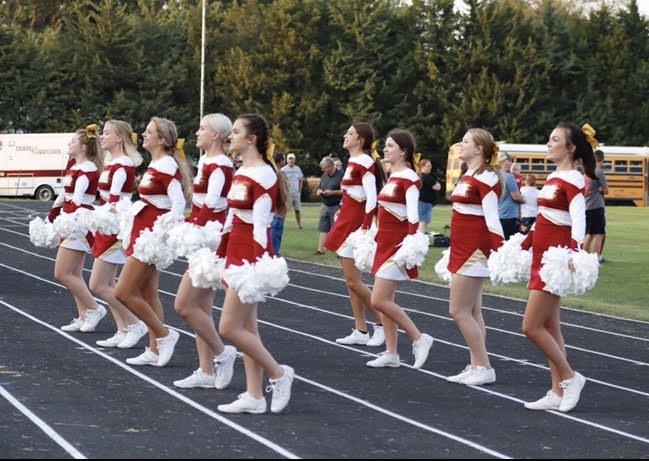 Cheerleaders pump up the crowd at a Friday night football game!

MURRAY- Many people look at Conestoga’s cheerleaders and think we’re self-absorbed or that we don’t care about people who aren’t on the cheer team. People look at us and think we are the stereotypical cheerleaders that you see in movies. Negative things are spread about us just because of assumptions about us from other people. But who are we really?

“I think people think we are all kind of stuck up and bratty. Some of the girls on our team can come across as mean or rude, but they are all actually very sweet and funny,” said sophomore cheerleader Makenzie Jones. “Most people appreciate us but there are a select few who think we are annoying and don’t like us, but that will always happen. We have a lot of personality that sometimes doesn’t show through when we are walking around school.”

The cheer team has practice every Monday from 9-11 A.M. At practice we go through all the cheers we’re going to be using that Friday night at the football game. We do stunts where we throw girls in the air, and yes, we do sometimes fall. But we get right back up and keep going. “Cheer practice is something that I look forward to every week, because I get to go and have fun with my friends, and have a lot of laughs while still doing something productive for my school,” said Jones.

We all work so hard to cheer others on, and we want to encourage others and be a positive influence. It’s why we do what we do. We wouldn’t be cheerleaders if we didn’t want to make people feel included as much as we possibly can.

“I think a lot of people in our school don’t really pay much attention to the team. At a lot of games the fans don’t really cheer with the team either,” said sophomore student Gabrielle Lewis. That viewpoint seems prevalent throughout the student body.

When we’re cheering, sometimes it’s hard. When a team of ours is losing and the fans don’t have it in them to keep cheering, we’re there. It’s our job to cheer.

Being on the spirit squad is a really fun thing! During homecoming week we get to pick the theme, all themed days, and decorate for the dance. It’s a full week, and it’s stressful for sure, but if I had the choice, I would choose it every time.

Being a cheerleader is hard. You have a full schedule most of the time, especially when you are also doing another activity. It’s also hard because of what people say about you, you have to pretend you don’t hear all the negative stuff being said about you. We’re cheerleaders, we have to be peppy, and happy, people count on us to do that. It’s what we do, and it’s who we are.

Some people may not fully appreciate what we do and that’s ok! We’re just going to keep cheering and maybe if you want to, why not cheer with us? It can be pretty fun!