You Don’t Know Us – Band

Get in Tune with the Conestoga Band 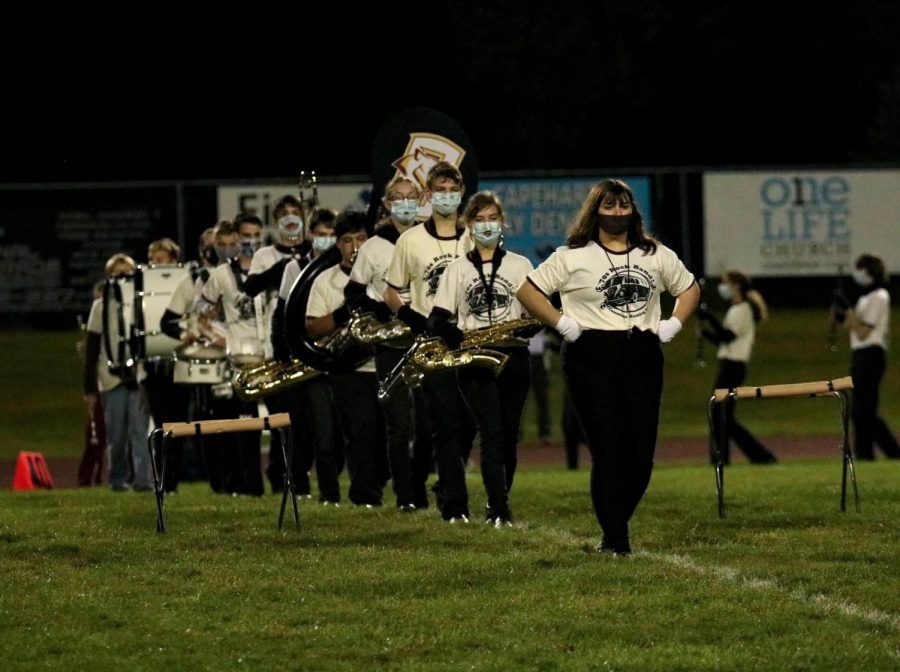 Lily Drannen leads the Conestoga band onto the field for their first field show of the year.

Murray, Neb.-When most people think of band, they picture a bunch of un-athletic nerds. Students at Conestoga are the same way. What people don’t see is the dedication that goes into making the band sound great and the fun moments band members share. Many people also don’t realize just how involved many of the band’s members are in other activities.
It’s time the students of Conestoga really got to know us.

At every band practice, concert, field show, parade, and anything involving the band, the students are always having fun and making the best of things. Director Cassi Vallis admits that the band can be a bit of a handful at times. “Can the band be a handful at times? Absolutely! But the band wouldn’t be a band without the time commitment, unpredictability, and competitive energy!” says Vallis. No matter how little or how much time the students have, they always manage to fit somebody in a tuba case, surprise Mrs. Vallis or do something interesting.

One way that the band shows a silly side of themselves is band camp. Band camp is a week-long camp in the summer that helps band members memorize music, perform a field show, and anything involving musical theory and/or the band. In the band, you can always hear “do you remember that one time at band camp..” echoing around the members. “The craziest thing at band camp is probably the water balloon fight at the end,” says Delaney Deterding, sophomore trumpet player.

Another thing that many misunderstand about band players is that most are involved in a lot of activities at Conestoga, not just the band. There are only a few students in the Conestoga band that aren’t involved in any other activities. Yes, the band does take a ton of time and commitment but that doesn’t mean that students can’t do football, wrestling, softball/baseball, volleyball or any other school activities. Almost 60% of high school band members are involved in other sports, clubs and activities.

Luckily, though, this does not happen often at Conestoga. Teachers and staff work very hard to make sure that students are not bullied, but the risk is still there.

Being a part of the band can be time consuming and draining for members. However, the students do it because they feel a sense of belonging and it just feels right. Hopefully now people have a better idea of what band members go through.

The next time you hear the school song, make sure to clap for and encourage the band. They would really appreciate it!